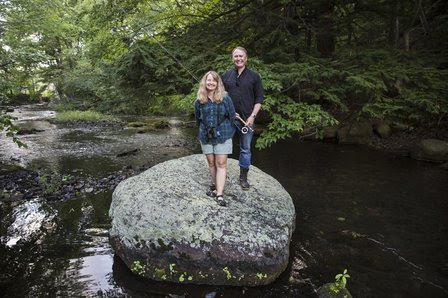 Paul Doiron is the author of the Mike Bowditch series of award-winning crime novels, including The Poacher's Son, which won the Barry Award and the Strand Critics Award for Best First Novel; Trespasser, which won the Maine Literary Award and was an American Booksellers Association Indie Bestseller; Bad Little Falls, a Bookscan Bestseller; Massacre Pond, an Indie Next pick and an Indie Favorite, as well as a Bookscan Bestseller; The Bone Orchard, which received Down East's Best of Maine award; The Precipice, a LibraryReads selection and RT Top Pick; and Widowmaker, which was also a LibraryReads selection and a #1 Maine Sunday Telegram bestseller. The eighth and most recent addition to the series, Knife Creek, comes out in June 2017. His novels have been translated into 10 languages.

Paul is Editor Emeritus of Down East: The Magazine of Maine, having served as Editor in Chief from 2005 to 2013 before stepping down to write full time. A native of Maine, he attended Yale University, where he graduated with a degree in English, and he holds an MFA in creative writing from Emerson College. He is a former member of the Maine Arts Commission and a current member of the Maine Humanities Council. He is also a Registered Maine Guide specializing in fly-fishing. You can read more about Paul and his books at www.pauldoiron.com.

Kristen Lindquist, Paul's wife, is a poet and freelance writer whose writings have appeared in such venues as Down East, Bangor Metro, Bangor Daily News, as well as many literary journals and anthologies. Her chapbook Invocation to the Birds was published by Oyster River Press in New Hampshire as part of its Walking to Windward series. Her first full-length poetry collection, Transportation, was a finalist for a 2012 Maine Literary Award. Garrison Keillor read three poems from the book on National Public Radio's The Writer's Almanac. Her second book, Tourists in the Known World: New & Selected Poems, was published this spring.

Kristen attended Middlebury College and holds an MFA in poetry from the University of Oregon. An avid birder, she leads bird walks all over Maine and for the Acadia Birding Festival. She has written a natural history column for the local paper for many years and for the past eight years has maintained a daily haiku blog, Book of Days, at klindquist.blogspot.com. She and Paul live at the foot of the Camden Hills in her hometown of Camden, Maine.
Posted by Pillsbury Free Library at 10:09 AM

We welcome news, events, articles and photos that support and encourage a feeling of community and connection for all residents, neighbors and visitors.

Great! Send your name, email, and what group/business/interest you represent to Sandy at: beezink@tds.net or Nancy at pfl.director @ tds.net
You will receive an invitation to join this blog. Simply click the link and follow the directions. Easy peasy!